Why stonewalling’s not the best strategy

Who’d have thought that a redundant anti-tank wall could create such passion – or so much grief for an under-pressure States of Guernsey committee?

Especially since, under powers of delegated authority, Environment and Infrastructure (E&I) should simply have been able to go ahead with its plans for the partial removal of the former anti-tank wall at the eastern part of Pembroke Bay (L’Ancresse East) and the managed re-alignment of the coastline in the area.

Perhaps that was the problem – assuming that because you can do something, everyone wants you to go ahead and do it.

Perhaps that led to the committee leaving what can now be seen as loose ends – the future of the kiosk and toilets, concerns over the future of the golf course’s signature hole, and whether there’s physically enough sand in the bay to reform dunes – dangling for critics to pick at.

Whatever it was, the committee is now substantially investing time in trying to recover a message it has lost much, if not all, control over. To the point where prominent parishioners are seriously warning in the Guernsey Press that roads could be lost through E&I’s actions: 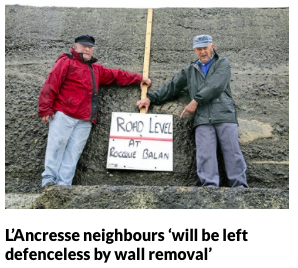  
The States will have the final decision of course, now that the committee has agreed to take it to the Assembly (rather than risk being forced to do so).

But whatever the eventual outcome, E&I’s already lost the debate in the eyes of those most actively opposed to it, and they are not without influence.

Anyone supportive of the scheme and in agreement with E&I’s vision of – in effect – restoring the bay to its pre-1942 condition will be reflecting that a more sensitive approach to the committee’s presentational package would have saved a lot of effort and uncertainty now.